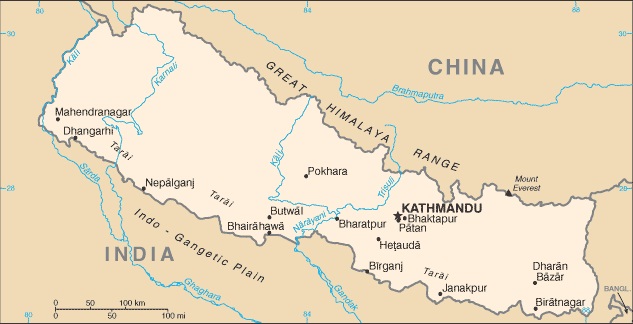 General Cultural Information: Nepal, officially the Federal Democratic Republic of Nepal, is a country in South Asia and, as of 2010, the world's most recent nation to become a republic. Nepal is a country of highly diverse and rich geography, culture, and religions. By some measures, Hinduism is practiced by a larger majority of people in Nepal than in any other nation. Buddhism, though a minority faith in the country, is linked historically with Nepal as the birthplace of the Buddha. About half of the population live below the international poverty line of US $1.25 a day.

Family structure: In Nepal, people do belong to extended family systems, however as they migrate to the US, they become more independent. Nepal is a patriarchal society. Women are expected to raise children and are in charge of household duties. Family elders are sometimes responsible to arranging a marriage, however these traditions cease as a result of westernization. Children are expected to respect elders, and perform chores, they must obey the rules established by the elders.

For the most part, Nepalese culture and beliefs are based on Buddhist and Hindu values.

Food in Daily Life: Nepalis staple food is rice. Most residents eat a large rice meal twice a day, usually at midmorning and in the early evening. Rice generally is served with dal, a lentil dish, and  tarkari, a cooked vegetable. Often, the meal includes a pickle achar, made of a fruit or vegetable. In poorer and higher-altitude areas, where rice is scarce, the staple is dhiro, a thick mush made of corn or millet. In areas where wheat is plentiful, rice may be supplemented by flat bread.

Communication Style: A typical Nepali greeting is composed of pressing palms together and saying namaste, however, as they enter the western world, handshakes become a general form of greeting. Physical contact between a man and a woman is considered inappropriate. Too much eye contact is considered aggressive behavior. Raising voice is also considered inappropriate, as the Nepalese people are very polite. Hospitality is essential.

Concepts of Health and Wellness: Buddhist and Hindu practices are used in performing health rituals There is a strong belief in reincarnation and actions of present life reveals whether one has achieved enlightenment. As one achieves enlightenment, the cycle of reincarnation ends. If one has not achieved enlightenment, they continue to be reincarnated to complete a proper form of life.  Some people look to ayurvedic medicine to care for illness. This is used to relieve body of imbalances thorough diets; Aurvedic, shamanic, biomedical, and other systems.  Nepalese Americans trust the conventional medical establishment.

Death and Afterlife: Traditionally, the dead are cremated on rive banks. A son is usually expected to perform the funeral rituals. Some Buddhists may practice “sky burials” which is when corpses are cut up and left at sacred sites for vultures.

Countries and their Culture:  Nepal.  Retrieved from  http://www.everyculture.com/Ma-Ni/Nepal.html#ixzz1PvSeBYOd