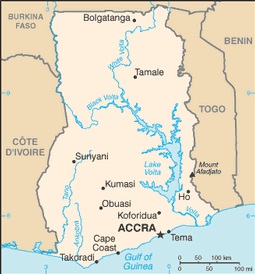 Ghana is a populous ethnically diverse country with over 100 ethnic groups living in Ghana. Ghanians come from six main ethnic groups: the Akan (Ashanti and Fanti), the Ewe, the Ga-Adangbe, the Mole-Dagbani, the Guan, and the Gurma. The culture of Ghana differs from one ethnic group to another. Ghana Cultural emphasis is given to individual conduct and behavior which has a direct impact on the society and family. Thus everyone tries to be hospitable, kind hearted and respectful in public gatherings and in other walks of life. The major decisions regarding any custom and other tribal matters are taken by leaders and chiefs. Factors like formal education, membership in professional associations, and ethnic affiliation decides the importance of a person in the society.

Ghanaians are very cheerful people and love to celebrate all the major festivals and events round the year. The place has the highest number of Christians in West Africa. Seasonal celebrations like Christmas are celebrated in a grand scale and bring a whole tribe or a clan together. Naming ceremonies, puberty initiations, marriage and death are all marked by family ceremonies. Everyone participates in the major ceremonies, the most frequent of which are funeral celebrations typically lasting several days.

Family is a very strong bond in Ghana and is the primary source of identity, loyalty and responsibility. Ghanaians emphasize communal values such as family, respect for the elderly, honoring traditional rulers, and the importance of dignity and proper social conduct. Individual conduct is seen as having impact on an entire family, social group and community; family obligations take precedence over everything else in life. Individuals achieve recognition and social standing through their extended family. The entire family shares any loss of honor, which makes the culture a collective one. In order to protect this sense of face there is a need to maintain a sense of harmony; people will act with decorum at all times to ensure they do not cause anyone embarrassment.

Food in Daily Life:
Soups are the primary component in Ghanaian cuisine and are eaten with fufu (either pounded plaintain and cassava or yam), kokonte (cassava meal cooked into a paste), banku (fermented corn dough), boiled yam, rice, bread, plantain, or cassava. The most common soups are light soup, palmnut soup, and groundnut (peanut) soup.

As with many ex-colonies in Africa, the official language of Ghana is the English. Nine languages have the status of government-sponsored languages: Akan, Dagaare/ Wale, Dagbane, Dangme, Ewe, Ga, Gonja, Kasem, Nzema. However, two dialects of Akan, Twi and Fante are also widely-spoken in Ghana.

Ghanaian society is hierarchical. People are respected because of their age, experience, wealth and/or position. Older people are viewed as wise and are granted respect. In a group one can always see preferential treatment for the eldest member present. With respect comes responsibility and people expect the most senior person to make decisions that are in the best interest of the group. Customs are often passed on through the extended family, and the customary leaders or chiefs, are given historical authority over social, family, and land-related matters. Relationships within traditional society are based on family membership, inherited status, and ancestral beliefs. In modern society, relationships are determined by achieved status, formalized education, membership in professional associations, and ethinic affiliation. The result is that, even those who live primarily in the modern urban settings remain bound to traditional society through the kinship system and are held to the responsibilities that such associations entail.

An interesting cultural variation among the Akan, or Ashanti and Fanti people, is that affiliation within the clan is through women. Mothers have a higher status as in their point of view people get their blood from mothers.

Ghanaians are more indirect communicators. This means they take care not to relay information in any way that could cause issues, whether that be giving someone bad news, turning down an invitation, refusing a request or any other such matter. Ghanaians always want to protect their own and others’ face as well as maintain harmonious relationships.  As a result they tend to use proverbs, wise sayings, analogies readily. This allows ideas or messages to be convened in a manner that does not seem so blatant. In fact people who are viewed as wise frequently speak in proverbs. Silence is a common means of communication. If someone is uncomfortable with a question or do not think the asker will appreciate response, they will say nothing rather than make the other person uncomfortable.

Hierarchy is respected so the most senior person is greeted first. He/she may be the spokesperson for the group or may deputize key stakeholders to speak.

•      Handshakes are the most common means of greeting.

Traditional or native greetings vary among the various ethnic groups. When shaking hands between themselves Ghanaians will hold the right hand in the normal manner but will then twist and click each other’s middle finger.

•      Unless you are experienced it is best to stick to a normal handshake!

•      Christians will generally shake hands between the sexes; practicing Muslims often will not shake hands with people of the opposite sex. It’s generally common to wait for a woman to extend her hand first.

•      Address Ghanaians by their academic, professional, or honorific title and their surname.

•      Take time to enquire about people’s health, family and jobs. To rush a greeting is extremely rude.

•      Wait until invited before moving to a first-name basis. The younger generation will tend to do so rapidly.

Concepts of Health and Wellness:

In Ghanaian culture, illness is generally believed to be a very personal and private matter--something that is discussed secretly in hushed tones behind closed doors. This is a result of illness being regarded as a sign of weakness or the consequence of negative choices in one's relationship with God. Some also believe that illness can be brought upon someone by a maleficent curse. Privacy also stems from the Ghanaian community's tendency for being rather "gossipy"-- for lack of a better word. Following the "small town model", word spreads and is exaggerated quickly within the Ghanaian community. The privacy of others is rarely respected. Medical care and advice are also frequently neglected. This is usually because patients and their families believe that their condition is between them and God, and if it is in his will, God will cure them.

Fertility is also a large part of Ghanaian culture. Women were created to have healthy babies. So, if a woman gives birth to a child suffering from a physical, or psychological disorder it is occasionally viewed as a disgrace upon herself and her family. When an African gets sick, a lack of trained doctors or medicine leads many to traditional practices, especially spiritual cures, some using religion, and appeals to ancestors. Belief in supernatural forces is common in Ghana and other African countries. Death, suffering and diseases are often attributed to witchcraft. Over thirty percent of Ghanaians believe such evil forces could be responsible for the spread of HIV/AIDS, according to research data.
Traditional medicine is closely linked to the culture of the Ghanaian and as the case may be among most African societies. Being a heterogeneous society there are variations but the underlying theme of all these practices and beliefs are the same. There are believed to be spirits of mystical powers e.g. agents of ―witchcraft, magic and sorcery with powers to aid or harm man. There are also the charms, amulets and talismans (suman) used for protection or for offensive purposes. One’s health is dependent on the good relation or connection that is established between an individual and the chain of authority; from the supernatural being, ancestors, deities to the other smaller gods. If orthodox medicine doesn’t work and the African uses his belief system, that he has sinned against God, he will use a priest. If he has sinned against the lesser gods, he will consult spirits and shrines. To Ghanaians in general, witchcraft is a fact of life. More than one third of Ghana's population believe that AIDS is caused by witchcraft.  Women who have been declared witches are often expelled, and forced to live in special villages.  But people do live in both a traditional and modern world at the same time. They may be Christians or Muslims, while still holding on to their traditional African religious beliefs.

In Ghana, traditional health care is a holistic one that integrates the people's ethics, religious, morals and cultural values. Many Ghanaians believe that an individual's health is linked to the metaphysical and supernatural world, with Odomakoma(the creator), abosum (the deities and divinities) and ancestral spirits. Naturally, with such beliefs, diseases have spiritual dimension among many Ghanaians. In Ghana, as in most African countries, it is estimated that more than 60% of the population uses Traditional medicine in many instances to help meet some of the primary health care needs. As a result many people use both orthodox and traditional medicine treatments depending on what is wrong with them at a point in time. In fact it would be accurate to say that more than 90% of the population in Ghana has used some form of traditional medicine at one point in their life.
Treatments with traditional medicine embrace all ailments from simple bruises through fever, malaria, sexual weakness, piles and even preparations that combat rapid development of AIDs in HIV Positive people.  Migration of many Ghanaians to seek greener pastures and for other opportunities abroad has not led many to abandon or forget their traditional medicine usage. The use of traditional medicine from Ghana is rather becoming popular among Ghanaians abroad especially those in UK, Germany, Holland, Belgium, Denmark, Canada, Sweden, Scotland and the USA. The names of Traditional Medicine in popular demand by Ghanaians both in Ghana and in the West include: Living Bitters is used for colon cleansing; Madam Catherine is used as blood tonic or blood purifier; Alafia Bitters, Karafi Bitters, Adutwumwaa Bitters, all blood cleansers,Mighty Power, a blood cleanser, Swedish Bitters, A high blood pressure and Cholesterol controller; Dr. Agyenkwa, a stomach ulcer medicine and Aphrodic Capsules by Agrata Natural Health Centre in Accra.

Central Massachusetts has a large Ghanaian population. The men, who came to Worcester in the mid-1970s, are among the first wave of immigrants from Ghana to arrive here, forming a community that has grown to about 10,000 in Central Massachusetts and upward of 3,000 in greater Worcester. This region contains one of the greatest concentrations of Ghanaians in the country.