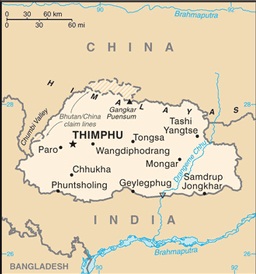 Geography: The Kingdom of Bhutan is a landlocked country in South Asia, located at the eastern end of the Himalaya mountains and bordered to the south by India and to the north by the Tibet Autonomous Region of the People's Republic of China.  It is 18,000 square miles in size.  It is divided into three zones: the southern zone, the central zone, and the northern zone. The main population lives in the central zone. The federal capital, Thimphu, is located in this section.

General Cultural Information:  Bhutan has long maintained a policy of strict isolationism, both culturally and economically, with the goal of preserving its cultural heritage. The name Bhutan is derived from the ancient Indian term "Bhotania," which means "end of the land of the Bhots" (Tibet). Most Bhutanese refer to their homeland as Druk-yul, "Land of the Thunder Dragon" which is the official name. Bhutan is the name used for most international business and reference. Bhutanese belong to several ethnic groups: Ngalops or Bhutia, Sharchops (both collectively referred to as Drukpas), Lhotshampas  or Nepali, and other indigenous groups. The Drukpas form the major chunk with nearly 67% of the total population. The Ngalops who are Tibetan descendents, live in the Northwestern and Central Bhutan. They are credited with bringing Buddhism to the country and dominate politics and religious life in Bhutan. The Sharchops’, the Indo-Mongoloids (usually referred to as Monpas, which means non-Tibetans) migrated into Bhutan two thousand years ago from north India, northern Burma, and Thailand. Believed to be Bhutan's earliest settlers, they live in the southeastern and eastern region.  They speak both Tibeto-Burman languages as well as Hindi. The third main ethnic group is the Lhotshampas or Nepalis, who migrated to Bhutan toward the end of the nineteenth century form 20% of the population. The rapid growth of the largely Hindu Nepalese population in Bhutan towards the end of the twentieth century resulted in significant ethnic conflicts with the Buddhist majority.  Indians, Tibetans, Sikkimese, Sherpas, etc., form the remaining 13% of the population.

Linguistic Affiliation: There are 24 languages currently spoken in Bhutan, all of them in the Tibeto-Burman family, except Nepali, an Indo-Aryan language. The national language is Dzongkha and the script called Chhokey ("Dharma Language"), which is identical to classical Tibetan. English is taught as a second language and Dzongkha is taught as the national language. Residents of the east and west, which sometimes makes it difficult for them to understand each other, speak different dialects. A large proportion of the population―especially urban residents―speak English.  Tshangla is the other major language and is spoken by Sharchops in the east with 11 different dialects.

Family Structure:  Bhutan's culture does not isolate or disenfranchise women. Bhutanese women have traditionally had more rights than men in surrounding cultures, the most prominent being the presumptive right of land ownership. The property of each extended Bhutanese family is controlled by an "anchor mother" who is assisted by the other women of the family in running affairs. As she becomes unable to manage the property, the position of anchor mother passes on to a sister, daughter or niece. Anthropologists know this pattern of inheritance as matrilinearity. Men and women work together in the fields, and both may own small shops or businesses. Men take a full part in household management, often cook, and are traditionally the makers and repairers of clothing. In the towns, a more "western" pattern of family structure is beginning to emerge, with the husband as breadwinner and the wife as home-maker. Both genders may be monks, although in practice the number of female monks is relatively small. Although education is preferred,  the children do not have easy access to schools, so attendance is fairly low - with approximately 25% of the children attending primary school and only 5% attending secondary school in 1998. Within these numbers, the ratio of boys attending school is much higher than that of girls.

Marriage: Until few decades back, arranged marriages were popular and people married among their relatives, particularly in eastern Bhutan, where cross-cousin marriage is a popular tradition. The Bhutanese are essentially monogamous. Polyandry (multiple husbands) has been abolished; the practice of polygamy is legal provided the first wife grants her consent. Traditionally the groom moves to the bride's family home (matrilocality), but newlyweds may decide to live with either family depending on which household is most in need of labor. Dowry is not practiced, and land is divided equally between sons and daughters. Girls receive nearly equal educational opportunities, and while they are accorded a lower status than boys, they are cherished because they are the ones who care for parents in old age.

Etiquette: As a traditional society, the Bhutanese follow a highly refined system of etiquette, which is called "driglam namzha." This traditional code of conduct supports respect for authority, devotion to the institution of marriage and family, and dedication to civic duty. It governs many different sorts of behavior, including how to send and receive gifts, how to speak to those in authority, how to serve and eat food at public occasions, and how to dress.

Birth: In Bhutan, the birth of a child is welcomed without any gender discrimination. The first three days after the birth is considered to be polluted by kaydrip (defilement by birth). Thus outsiders do not visit the child for three days. Outsiders come after a purification ritual (Lhabsang) is conducted in the house. Visitors bring gifts for both the mother and the child.

Religion: Most Bhutanese (75%) practice Tantric Vajrayana form of Mahayana Buddhism. There are ten thousand Buddhist monks and they are involved in both the religious and social lives of the Buddhist population. Because of the religious significance of nearly every important event in the life of a Buddhist, the monks visit households and perform rites on such occasions as birth, marriage, sickness, and death. The Dzong (monastery/fortress) is headed by an abbot who is typically a lama. The highest monk in the land is the chief abbot of Bhutan, Je Khenpo and he is theoretically equivalent in stature to the king. Monks join the monastery at six to nine years of age and are immediately placed under the discipleship of a head Lama. They learn to read chhokey, the language of the ancient sacred texts, as well as Dzongkha and English.  To have a son or brother serving in such a monastery is very good merit for a family.

Approximately 23% of the total population, mostly in Southern Bhutan is Hindu. There is a broad range of Hinduism that is practiced ranging from traditional Hinduism to a combination of Buddhism/Hinduism where gods in both religions are worshipped. There is a small Muslim population in Bhutan, 1.6%.

Death and the Afterlife: Both Buddhists and Hindus believe in reincarnation and the law of karma. The law of karma dictates that an individual's decisions and behaviors in one life can influence his or her transmigration into the next life. As it does not mean the end, and Bhutanese believes in rebirth, death is one of the most expensive affairs. Many rituals are performed to help the departed soul get a better rebirth. Rituals are performed after the 7th day, 14th day, 21st day and the 49th days of the death. Cremations are done only on a favorable day arranged by the astrologer.

Food in Daily Life: Because of the ethnic diversity of the people, there is diversity in the food. Northern Indian cuisine is often mixed with the chilies of the Tibetan area in daily dishes. Spices, fruits, and vegetables are cooked with beef, chicken, pork, and dried yak, and resemble Chinese and Indian cuisine.  Ema datse, made with green hot chilies and cheese stew, is considered the national dish with many interpretations to this recipe throughout the kingdom. Meat dishes, mainly pork, beef and yak, are lavishly spiced with chilies, and it is common to see bright red peppers drying on rooftops in the sun. Salted butter tea, or suja, is served on all social occasions. Eating with spoons is imported culture as people generally eat with their hands.

Communication Style: Bhutanese people have a distinct manner of greeting people, sometimes with a slight nodding of the head or bowing slightly if they meet older, senior people. Don’t talk loudly when meeting Bhutanese.  The Bhutanese people are not used to open intimate behavior.  Sometimes, you may come across people of the same gender holding hands but this is usually a sign of friendship and has no sexual connotation. Light touching is common between friends and family members. Use your right hand or both hands to give or receive.  Don’t point your feet at anyone; cross your legs or kneel when sitting.

Concepts of Health and Wellness: Bhutanese refugees generally approach medical care from an emergency perspective rather than that of preventative health care. Cultural and language barriers make the shock of navigating the U.S. healthcare system very difficult and overwhelming.

Medicine and Health Care: The Bhutanese TM gso-ba rig-pa, which has roots from Tibetan Medicine is unique in its characteristics that have resulted due to diversity of its origins, local influences over centuries of practice and natural environment of rich bio-diversity. It is based on the Buddhist philosophy and principles of five cosmo-physical elements known as Sa (earth), Chu (water), Me (fire), rlung (air) and Namkha (sky) in the universe. Any imbalance in these five elements will result in suffering and health while wellbeing is defined as state of perfect balance between the five basic elements. Ignorance is the origin of the three mental poisons known as Dod-chag (desire, attachment), Zhel-dang (hatred, aggressiveness), and Timug (delusion, mental darkness) respectively. In turn these three mental poisons will produce rLung (air), mKhris-pa (bile) and Bad-kan (phlegm), which are the three origins of sickness. All the treatment and therapy services under TM are aimed at promoting balance of the five elements and neutralizing the three poisons that cause illness, through a holistic approach.

Crossette, Barbara. So Close to Heaven: The Vanishing Buddhist Kingdoms of the Himalayas, 1995.