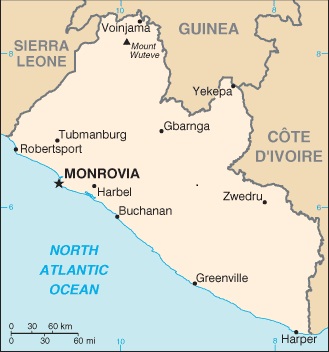 General Cultural Information: Liberia is a country on the west coast of Africa. The history of Liberia is unique among African nations because of its relationship with the United States. It is one of the few countries in Africa, and the only country in West Africa, without roots in the European scramble for Africa. It was founded and colonized by freed American slaves with the help of a private organization called the American Colonization Society in 1821-1822. The culture of Liberia reflects this nation's diverse ethnicities and long history. The official language of Liberia is English. There are more than 20 indigenous languages and a few have their own unique alphabets.

Family Structure: The people are defined by extended family.  A typical household contains a couple, their children, and the parents of the couple. An extended family home would contain cousins, brothers, sisters, nieces, and nephews as well. There is a high priority in respecting one another, especially the elderly, as they are the source of wisdom and knowledge. Therefore, their say in family matters is very important. School is a number one priority of the children. Parents will make other financial sacrifices to ensure a good education for their children. Children are valued as future supporters of the parents in the old age, so it is important to create appreciation. Chores are taken at an early age to understand responsibility.

Religious Practice: Pre-coup Liberia often characterized itself as a "Christian nation," but a number of shifting religious identities and practices were and still are available. Active membership in a Christian denomination probably involves less than 20 percent of the population. Twenty to 30 percent of the population is at least nominally Muslim, and the remainder practices indigenous religious systems surrounding ancestor worship and secret society membership. Even in areas of widespread Christian or Muslim conversion, indigenous institutions such as polygyny, belief in witchcraft, and trial by ordeal persist. Many individuals combine elements from all three systems. Funerals are very important in all religions and are as elaborate as a family can afford, often going on for days or weeks.

Food in Daily Life: The primary staple is rice. This complex carbohydrate forms the centerpiece of the meal, and savory sauces provide flavor. Meat or fish is used as a garnish or ingredient in the sauce rather than being the focus of the meal. In rural areas, people begin the day with a small meal of leftover rice or boiled cassava dipped in the sauce from the day before. Depending on the time of year and work schedule, the main meal may be served at midday or in the evening. Snacks of mangoes, bananas, sugercane, coconut, fried plantain or cassava and citrus fruits may be consumed throughout the day.

Communication Style: Greeting styles depends on the ethnic group being greeted. It is important to greet with a smile, and eye contact while shaking hands. Women usually nod their head and say hello, however if a woman does extend hand, it is okay to shake the hand.

Concepts of Health and Wellness: Infectious disease is the major health concern in Liberia. This includes Malaria, tuberculosis, choleria, yellow fever, and polio. These are not suffered by Liberian Americans, they suffer hypertension, diabetes, high cholesterol, stroke, and heart disease.

There is a belief in witchcraft, and people may hold that responsible for illness. Home remedies and rituals may be practiced to heal common health issues.

Death and Afterlife: Funerals are a time of grief and joy, and may continue for days or weeks. Family and friends greatly miss the deceased, however they appreciate that their loved one is now in a better place. A wake is held at the family's home on the night before the funeral. There is a feast, spiritual singing and music to heal those who are grieving the loss.

An online magazine of news from Liberia and within the Liberian American community. Contents include news, features, sports, entertainment, an email directory of Liberians in the United States, and several chat rooms. It also has dozens of links to other Liberian Web sites.   http://www.tlcafrica.com/

Coalition of Progressive Liberians in the Americas (COPLA) based in New York with an office in Georgia, describes itself as "a watchdog of vice and virtue" in the Liberian community.

Countries and their Cultures.  Liberian Americans.  Retrieved from http://www.everyculture.com/multi/le-pa/liberian-americans.html#ixzz1pvfzmctd