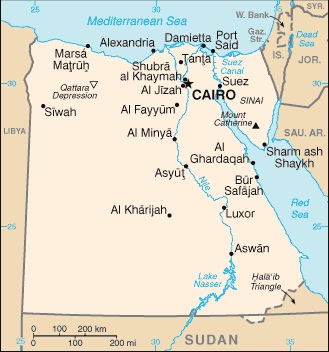 Egypt lies in North Africa bordering the Mediterranean Sea and Red Sea, is between Libya and the Gaza Strip and North of Sudan.  Egypt includes the Sinai Peninsula which forms a “land bridge” in Southwest Asia.  90% of Egypt is desert; the majority of the people live near the banks of the Nile River where suitable land for cultivation can be found. The majority of the 80 million Egyptians reside in 3% of the total geographic area.  Cairo, the capital city and Alexandria are the major inhabited centers.

The Eastern Hamitic population consists of Egyptians, Bedouins, and Berbers making up 99 % of the population. Of these Ethnic Egyptians constitute about 94%.  Other minorities (about 1 % of the population) include Copts, Nubians, Arabs, Beja, Dom, Greek, Armenian, and other Europeans (primarily Italian and French).

They are Americans of Egyptian ancestry, first generation immigrants or descendants of Egyptians who immigrated to the United States. In the 2007 U.S. census, 195,000 are Egyptian ancestry, although some estimates range from several hundred thousand to 2 million. The largest majority of Egyptians in the U.S. are Coptic Orthodox Christians. A large community of Egyptian Americans lives in northeastern Virginia and the Washington D.C. metropolitan area. Other Communities are in Jersey City, New Jersey, Levittown, New York and Los Angeles and San Francisco, California and parts of Florida and Philadelphia.

For almost 13 centuries Arabic has been the written and spoken language of Egypt. Before the Arab invasion in AD 639, Coptic, the language descended from ancient Egyptian, was the language of both religious and everyday life. After the 12th century it had been totally replaced by Arabic for both the Egyptian Christian and Muslim. English and French are widely used for business and by educated urbanites.

• Greetings come before all forms of social interaction, the salaam gesture (bowing low with the palm of the right hand against the forehead), or “salaam” (peace). Families and friends embrace, shake hands and kiss both cheeks.  Clinicians should shake hands.
• Clinicians should inquire how to address person. People are addressed by their given name, often preceded by a title of: ′am or uncle, all purpose title for a man; hajj for an older man, or a pilgrim returned from Mecca; duktor for a person with a doctorate degree.
• Eye contact is sign of honesty and sincerity
• Loud voice shows the weight of the message; shouting and pounding the table are indicative to show a point. Information is repeated if they feel they are not being understood

The most significant food item in daily life is the bread loaf which is served with every meal. Main national breakfast is foul, a dish of fava beans seasoned with salt, lemon, cumin and oil. Another common dish is tamiyya or falafel, which is made from crushed fava beans mixed with onions and leeks and fried in oil.
• Muslims eat chicken, lamb, beef or fish, but not pork.  All meat is well done to avoid eating “blood”.
• Hot chicken soup is important for recovery during sickness, no iced beverages should be offered; mint tea is frequently provided for abdominal discomfort
• Avoid mixing fish with milk, sweet with sour, or hot and cold with the same meal.
• Alcohol is prohibited to Muslims although non-practicing Christians and Muslims drink.
• Eat with the right hand only, left hand is for hygiene
• Children, pregnant or nursing women and the sick are excused from fasting

The personal name is a significant signal of family identity. Egyptians usually do not have “family” names shared by all family members as in Western culture.  Each Egyptian person has a given name, followed by the given name of his or her father, grandfather, etc. For legal purposes one’s name is frequently “given name, father’s name, grandfather’s name,” resulting in three names (for example, Hassan Ali Abdallah).  Therefore, a person carries one’s paternal lineage and one’s status in one’s name. Women usually do not change their names upon marriage.

Men are usually the main wage earners in the family. Women’s responsibility is household work and child rearing, also contributing to productive work in the cities. Women’s virginity is considered by men to be testimony of good karma and good morality. Women wear a scarf on their heads which represents Muslim piety.

Marriage is a most important focus of Egyptian culture. Muslims believe marriage to be a contract of signing followed by a family celebration. Christian marriage takes place in a church, with a family celebration.
Both Muslims and Christians believe:
• Prenatal care is often not sought as pregnancy is “natural.”
• Pregnant women should rest, eat well and do little work.
• Fathers are not expected to participate in pregnancy, labor or delivery
• Father’s whisper “Azaan” in newborn’s ear (a call to prayer)
• Naming ceremony one week after birth, mixing elements of “Islamic” (or Coptic) and “traditional” elements, this is a family celebration to bring the newborn into the family
• Often mothers do not breastfeed until after the first 48 hours as colustrum is believed to be harmful, although both Copt and Muslim women breast-feed children for two years (Koranic directive)
• All boys are circumcised usually as infants and girls are “circumcised” before puberty. The form of genital mutilation varies, survey suggests about 97% of Egyptians females both Christian and Muslim are affected.

In all parts of Egypt and among all social classes, having children is deemed the greatest blessing of all. Caring for children is mainly the women’s responsibility; grandparents also participate
• Preference for boys over girls; although both sexes are treated equally in infancy and early childhood
• Children are expected to be obedient; ‘back talk’ forbidden
• Children may fear hospitals, schools, healthcare workers and injections as families sometimes threaten children with these as deterrents

Families invest greatly in Education as it is extremely valued in Egypt. Obtaining a university degree is considered an important avenue for social mobility.

Muslim (mostly Sunni) 90%: Egypt is primarily Muslim with Islam being the state religion.  There are five pillars: First is the belief in the oneness of God, whose truths were revealed through the prophet Muhammad. The other beliefs are fasting in the month of Ramadan, the pilgrimage to Mecca, the five daily prayers, and the giving of alms. The Quran and the actions of the Prophet (the Sunnah) are used for guidance in the religion. Religious practice can involve visits to shrines looking for intercession with God to over-come troubles.Two major Muslim religious holidays are the feast following Ramadan Id al-Fitr and ‘Id al-Adha, which corresponds to the Muslim pilgrimage to Mecca. In Islam Friday is the day of congregational prayer. Muslims view fasting as a spiritual exercise which involves abstaining from food and drink from sunrise to sundown, usually during the lunar month of Ramadan (29 or 30 days).
Coptic Christians 9% and other Christian 1%: Over 90% of Egyptian Christians belong to the native Coptic orthodox church of Alexandria. Its religion is Monophysite, believing that in Jesus Christ there is one nature, both human and divine. The church is lead by a patriarch (who comes from the ranks of monks) and maintained by bishops, and parish priests. Monasteries provide as a holy place and retreat center for Copts. Egyptian Christians might fast over 200 days a year mainly in the period leading up to Christmas and Easter in addition to Wednesdays and Fridays of each week outside of the fasting time.

Death and the Afterlife

Death is feared, accepted as “God’s will”, but believe death should be delayed by biomedical interventions. Critically ill patients may prefer to die in the hospital; may lose trust in healthcare team if DNR orders are suggested. Families will not openly grieve before death of family member; they will however grieve openly and loudly and a private room may be beneficial. After death Christians and Muslims try to bury the body the same day. Koran reading may be an indicator of the Islamic condolence sessions. Condolences are expressed without delay, and again after 40 days and after a year
• Christian Families may ask a minister or priest visit
• Egyptian Muslims do not need an Imam present.
• Egyptian Muslims handle the body by same gender Muslim with modesty; oropharyngeal orifices are sealed with cotton, the body is covered with a sheet and turned towards Mecca.

Organ Donation/Autopsy: When presented as charity, Muslim families may agree, autopsy is challenging-reasons need to be offered in terms of benefit and have important results for the family

Naturalistic and social causes of sickness include bad luck, stress and bereavement; for children loss of love, germs, wind and drafts, hot/cold, imbalance and fear. Supernatural causes are Evil Eye (most Arabs believe in Evil Eye and keep special amulets during illness), God’s punishment for sins and the curse of the devil.
• Illness and suffering are believed to be god’s will
• Mental illness is highly stigmatized and help is sought in advanced stage. The Zar, a ‘trance religious ceremony’, using drumming and dancing is thought to cure mental illness caused by a demon.
• Disabled are treated with compassion and indulgence, and kept from the public as those with genetic defects; genetic counseling is generally refused.
• Institutional care is shunned
Egyptians will likely combine the present health system with traditional beliefs and customs for the purpose of healing.
• Amulets, sweating, Koranic or Biblical readings and dietary regimens are used.
• Camphor ointment, herbs as teas and poultices are used to treat cold, abdominal discomfort, musculoskeletal aches and pains.
• Toilet paper is not adequate for personal cleanliness and most patients prefer to wash after urination and bowel movements
• Yogurt is used for diarrhea and castor oil for constipation.
In Egypt there are the traditional health practitioners such as seers and spirit healers. When the Arabs came to Egypt, Arabic medicine was practiced. These traditional herbal medications are available in Attar shops and an increasing number of Egyptians are seeking herbal remedies because they are cheap and viewed as safer.  About 300 drugs of local origin are in the Egyptian market.

Medical professionals should avoid frank discussions of diagnosis and poor prognosis. Families may prefer to tell the information to the patient, but may ask a healthcare provider to be in attendance. The information should be given gradually and in a prolonged manner. Arab patients express their pain comparing it to fire, knives, rocks and iron. The patient’s concentration is on the present pain experience. The pain scale response may not indicate the actual acuity, for example, minor pain may be reported as a 10. Pain injections are thought to be more effective than pills. Most patients and families may avoid activities after surgery such as ambulation, coughing, and physical therapy for fear of pain and prolonging the disease. Admittance of depression and symptoms of depression are never disclosed.

Verbal permission based on trust is more acceptable than written consent.  Patients and their families do not like knowing about the potential complications before a medical procedure because it is thought to be bad luck.

Communication and Interpreter Use:

• Patients might not disagree in order to be polite; silence may not indicate agreement or understanding but respect
• Head nodding and smiles do not necessarily mean understanding
• Egyptians are emotional, they use hand gestures and narrative style to explain their symptoms
• Patients may feel proud to admit they need an interpreter to understand medical information. Same sex interpreters should be used particularly when the topic involves sex, eliminations, marital problems, reproduction, breast cancer, venereal disease, HIV/AIDS etc. Family members may change the message to protect the patient.