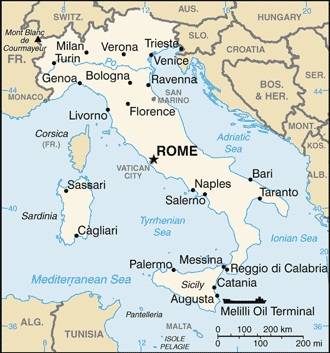 General Cultural Information: The Italian peninsula was referred to as Italia by the Romans. It is in south central Europe. Italy is composed of many different cultures such as Romans, Greeks, Jews, Sicily and Mediterranean people. It continues to be ethnically diverse. The official language is Italian, containing many different dialects in depending on the region. However, through education and media, standard Italian is spoken and understood by everyone. The population in Italy as of today is 60,221,211. Industrialization and urbanization has taken over the northern area of Italy. The south is of agricultural and rural nature, however, architecture had a strong influence even in the south. Italian Americans consists mostly of the immigration from southern Italy. "Their beliefs and practices are influenced by age, region of origin, education, socioeconomic status, place of residence, and year of immigration. Due to the long history of immigration from Italy, Italian American beliefs and practices in the U.S vary considerably.” (Lipson, J.)

Family Structure: The extended family is important, although in Italy the birthrate is low. Grandparents, aunts, uncles and cousins are invited to share family celebrations because power and age is greatly respected in Italian culture. It is disrespectful to criticize elders. The father may seem the head of the family, handling external business transactions. However, the mother had power within the family unit, because she runs the family finances. Italians make an effort to include children in special events because they have a special place in society. They learn to respect women, parents, and elderly. House hold chores, care for others, working to help with finances (depending on age) is all expected from children. Family meals are very important, thus everyone is expected to dine together. Family is one of the most important alter of respect, therefore an individual may sacrifice their rights or beliefs for family honor.

Religious Practice: Most Italians are Roman Catholic. Once, the church had a great deal of influence over the way of life of Italians. Today that influence has declined. However, many still allow a strong influence of the church in life. Some churches may have daily masses. Catholics observe baptism, communion, reconciliation, confirmation, marriage, holy orders, and illness. Rosary beads are often carried by older Italians for prayer. Some Italians are Pentecostal, Jewish, or other affiliations.

Food: Italians take pride in their traditional cuisine. In cases where the extended family is being invited over for dinner the preparations go underway well in advance. The tradition in Italy is such that the hosts generally prepare a lot more food than could actually be consumed during the event. One of the strikingly different things about the food culture in Italy is that the event does not get underway unless and until all the members on the guest list have arrived and all the food has been prepared.

The actual sitting down and eating process at an Italian dinner table is long, relaxed and spread over a couple of hours. To be precise the average Italian meal is three hours long during which the people consume their food in ten courses. Another prevalent tradition in Italian homes is that each guest brings an interesting homemade dish as well which adds to the already overwhelming menu. Since the courses are so many in numbers, they are usually small in quantity so as to be able to get a taste of everything.

It is fascinating to witness a culture that has developed around Italian food over the years. Even the people that are sitting down to eat at the table have their unsaid places as the elders sit at the head of the table with the younger generation sitting at the center of the table and women rushing back and forth from the kitchen.

Communication Style: Italian is the official language of Italy, but there are also hundreds of different dialects. Greeting family and friends consists of hugging and a kiss, while shaking hands with strangers. It is important to greet elderly first formerly by addressing their names of titles. Italians tend to be highly expressive of joy, sadness and grief. Conversation among family are loud and passionate, this style is normal in family communication. Italians like to use their whole body to express themselves. Direct eye contact shows sincerity, indirect eye contact is seen negatively; boredom, dishonesty, disrespect.

Concepts of Health and Wellness: Pain is greatly feared since it is viewed as evil, unnatural, and deprivation. It is also openly discussed. Breathing difficulty is seen as a sign of dying and fatigue is perceived as depression. Illness may sometimes allow patients to feel guilty because they may feel they are being unproductive.

Many Italians use alternative therapies--homeopathic medicine, acupuncture and massage. Traditional cures are often used for instance lemon for colds and flu, garlic for high blood pressure, and canarino, an herbal teach by boiling a few bay leaves together with some lemon rind, to treat a stomach ache. Some Italians believe that stomach poorly absorbs medicine or may believe that stomach is sacred for food, and prefer medication through injection. It is important to carefully educate patients on medication and procedures.

Death and Afterlife: Death is not greatly feared, it is viewed as right of passage. There is a belief in life after death. Families may want to take dying member home to care for. When death occurs, the family wants to be there and relatives visit at homes of deceased person's family. Families want to see the body and may want to touch the body. Funeral home prepares the body.

Countries and their Cultures:  Italy.  Retrieved from http://www.everyculture.com/Ge-It/Italy.html