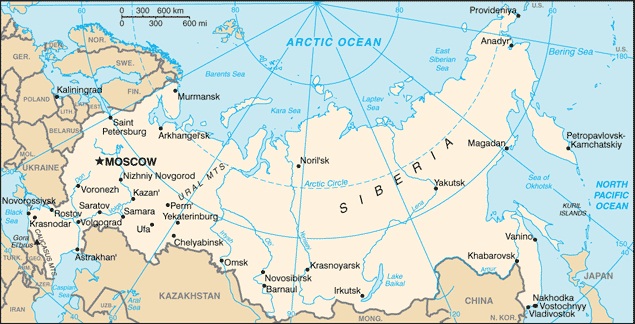 General Cultural Information: Russia also officially known as the Russian Federation, is a country in northern  Eurasia. Russia is by far the largest country in the world. Russia's 160 ethnic groups speak some 100 languages. According to the 2002 census, 142.6 million people speak Russian, followed by Tatar with 5.3 million and Ukrainian with 1.8 million speakers. Russian is the only official state language, but the Constitution gives the individual republics the right to make their native language co-official next to Russian. Despite its wide dispersal, the Russian language is homogeneous throughout Russia. Russian is the most geographically widespread language of Eurasia and the most widely spoken Slavic language.

Family Structure: Families are very close, and extended family structure is very strong. They depend on each other for childcare, chores, and general management of the house. The elderly are respected. The father, mother, and eldest siblings consult one another for decision-making. Although men prefer to be breadwinners, women have been in the work field for a long time in Russia. They are still responsible for the households and child care, however in the US; some men have started to help out with duties as home. At hard times, the whole family offer support and strength to each other. Obedience is always expected from a child, as they learn to respect their elders, and help with chores at home, and rearing younger siblings. Elders also help in raising their grandchildren. Nursing homes are not favored, family help care for elders.

Religious Practice: Christianity, Islam, Buddhism and Judaism are Russia’s traditional religions, deemed part of Russia's "historical heritage" in a law passed in 1997.  Estimates of believers widely fluctuate among sources, and some reports put the number of non-believers in Russia at 16–48% of the population. Russian Orthodoxy is the dominant religion in Russia. 95% of the registered Orthodox parishes belong to the Russian Orthodox Church while there are a number of smaller orthodox churches. However, the vast majority of orthodox believers do not attend church on a regular basis. Nonetheless, the church is widely respected by both believers and nonbelievers, who see it as a symbol of Russian heritage and culture. Smaller Christian denominations such as Catholics, Armenian Gregorians, and Protestants exist.

Food in Daily Life: Russians typically drink chai (hot tea). A typical Russian meal has four courses: zakuski (appetizers), pervoye (first), vtoroye (second), and sladkoe (dessert). Zakuski usually include fish, cold cuts, or salads. Alcoholic drinks such as pivo (beer), vodka, konyak (brandy), or kvass (made from rye) are customarily served during a formal meal. Ikra (caviar), a famous Russian appetizer made from harvested sturgeon eggs, is also a part of formal Russian cuisine. Borshch (borscht) is a traditional everyday Russian soup, made with red beets and beef, usually served with a dollop of sour cream. Blini are small crepes served with different types of fillings; pirozhki are fried rolls that usually have a meat or vegetable filling. Morozhenoye (ice cream) is a popular year-round treat. Kartoshki (potatoes) are often served at meals, either boiled, mashed, as pancakes, or as a kugel (baked pudding).

Communication Style: Greetings are taken very seriously, as a sign of respect. When greeting a stranger, men may shake hands, however it is inappropriate for women to shake hands (verbal greetings are appropriate). Family and friends may kiss one another on the cheek. People are addressed as Mr. or Mrs. and their last name. Direct eye contact is seen as a sign of respect and trust, socially important to maintain eye contact throughout the conversation. Generally Russians have a straight forward communication style.

Concepts of Health and Wellness: Family always care for an ill member. This includes bringing nutritious home cooked meals, and other remedies. Since they believe that too much medication is bad for ones body, they try different folk remedies to try and relieve their illness at home before seeking medical help. Russian Americans accept surgery and procedures as they become educated on the cause and effect. Exercising, healthy foods, and wearing appropriate clothing (for warmth) are daily practices for good health.

Death and Afterlife: Russians belief about death is related to the religion they belong. The Jewish law forbids euthanasia, suicide, and assisted suicide. After death, the eyes are closed, and body is covered and laid on the floor. Family members may want to bathe the body and dress it with special clothes. Bodies are accompanied until they are buried. Embalming violates tradition because the body is to undergo natural decomposition.

Countries and their Cultures:  Russia.  Retrieved from http://www.everyculture.com/No-Sa/Russia.html#ixzz1Q7Hv6geA