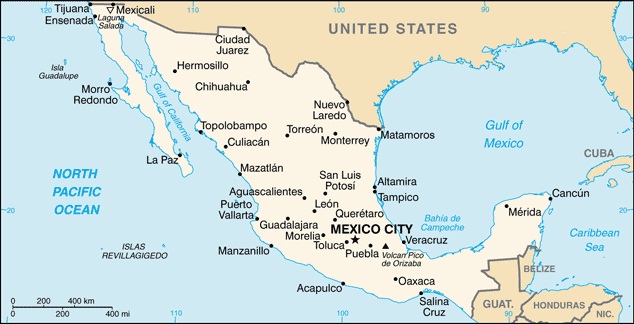 General Cultural Information: Mexico, or Estados Unidos Mexicanos, is bordered by the United States to the north, the Gulf of Mexico to the east, Guatemala, Belize, and the Caribbean Sea to the southeast, and the Pacific to the south and west. Mexican culture is closely related to the Caribbean and South American culture. Although it is one of the world's largest economies, some indigenous cultures still exist, mainly in Southern Mexico, a tropical/subtropical area. Mexico is considered a newly industrialized country and an emerging power. The local identities are strong, and this diverse culture is a source of pride in the country.  Mexico is one of the tenth most visited countries in the world.

Family structure: Families are generally large and extended. Traditional families are composed of parents, children, grandparents, aunts, uncles, godparents and cousins. The family unit usually makes the decisions, however if a person is on their own, they make their own decisions and informs the family. Social change has altered these extended family homes, mostly for financial purposes. Children are expected to behave, and honor their elders. Children may be addressed in a loud and firm voice for discipline. The males are able to move the family name forward. Children also face many difficulties in academic achievement due to racism, discrimination, and poverty. These factors decrease their academic skills to attend higher education.

Food: Traditional food includes rice, beans, meat, chicken, corn/flour tortillas. Snacks include sweet bread and pastries. Most have a big meal at lunch and lighter in the evening. There is a high tendency to eat fast foods. Chicken, pork and beef in steaks or stews, based with tomato-based sauce, spices, and herds (cilantro and cumin) are popular among Mexican Americans. Foods such as tamales, enchiladas, mole, chiles rellenos, are served in special occasions in Mexican American households/ events.

Communication: English and chicano Spanish is spoken in Mexico. Greetings include an appropriate handshake. Friends and Family meet with a hug, women may lightly kiss on the cheek. Standing when someone enters the room is a sign of respect. A loud environment, especially within strangers, is considered rude. Shouting may cause an individual to disengage. Communication is often indirect rather than blunt. May not disagree to be polite. Silence may indicate disapproval, disappointment, politeness or not understanding. Staring may be interpreted as a challange or intimidation. Sustained eye contact is avoidede with authoriy figures and opposite genders.

Concepts of Health and Wellness:  Income, acculturation, and education are factors that contribute to the perception of health. Individuals suffering poverty view survival as the only concern, while others believe in fitness and healthy eating as part of good health. Mexicans have a strong belief that life is in God's hands. Natural remedies using herbs are viewed as the most effected way to heal illness. Folk healers are perceived to have a God given ability to heal using herbs, oils and massages. Sometimes a person may apply remedies while seeing a physician.

Evil Eye (mal de ojo): Belief in the evil eye is widespread throughout Central America, the Mediterranean, the Middle East, much of Africa, and parts of Asia. Although the beliefs and associated practices vary, the concept generally includes an evil that one puts on another that causes the victim to fall ill. The motive is usually envy.

Belief in the evil eye can create distress and confusion between Mexican and American mothers. In Mexican culture, babies are considered weak and extremely susceptible to the power of an envious glance. It is not even necessary to wish a child a harm; a simple compliment, unaccompanied by a touch, can bring on the evil eye. Touching the person while complimenting him or her, however, neutralizes the power of the evil eye.

Americans are raised to believe that germs cause disease. Mothers are uncomfortable when people get too close to their infants. Mexican mothers, in contrast, may worry when strangers admire their babies without touching them. The very act that is believed to protect a child from illness in one culture is thought to cause illness in another. (Spector, 2004)

Death and Dying: In the past most people died at home, cared by their families. Today however, people are dying more frequently in hospitals, cared for by professionals. In many cultures, it is common for a serious diagnosis, such as cancer, to be withheld from the patient and given only to the family. It may be the thought to create a sense of hopelessness and hasten the dying process. For a Mexican American, the stress of knowing his or her condition will only cause him or her to get worse, moreover the very devout may believe that only God knows when some will die. For the health care staff, however, honoring the patient’s culture may mean ignoring the American values of honesty and individualism as well as create potential legal complications regarding the patient’s “right to know.”

When dealing with dying patients, one should not be surprised to find the family insisting that the diagnosis be withheld from the patient. Sometimes, it will be the patient who tries to hide the seriousness of the condition from her family. Often, each may know the truth of the situation but try to hide it from each other. (Galanti, 2008)

Concepts of Death: Death is considered as God's will. It is perceived to be a freedom from this life, to a better life. Religious belief has a big influence on the concepts of death. Many believe in the afterlife in heaven. Family members would usually need time with the body in the hospital before it gets moved into a mortuary, and may want to help prepare the body with their rituals. Burial rituals are more common than cremation. The body of the deceased is dressed in special clothing. Families may want to be around it overnight for relatives and friends to pray for the soul. Food may be served in the wake. Families sing religious prayers as the body is taken to the grave. Some may want to be buried in homeland. Black is worn to honor the dead.