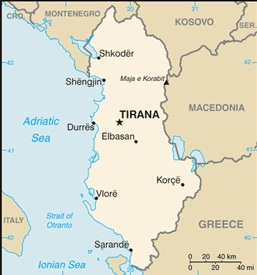 Geography: Albania is located in southeastern Europe. It borders Serbia, Macedonia, Montenegro, and Greece. It is a mountainous country, 28,748 square miles. Albanians call their country Shiqiptare, “Sons of the Eagle.”  The population is 3,360,000. The religion of Islam is practiced by 70% of the Albanians, 20% are Orthodox, and the remaining 10% are Roman Catholics.

General Cultural Information: In 1967, a flux of Albanian immigrants entered the United States when religion was outlawed in Albania.  Before 1990, the majority of Albanians who entered the United States were avoiding the instability of their country's political regime.  From 1044 until 1990 Albania was a communist country.  Religion was prohibited from 1967-1990.  All churches and mosques were shut down and religions practices were prohibited in an effort to promote nationalism.  In 1991 the country's name was changed from People's Republic of Albania to the Republic of Albania.  Between 1990 and 1992 Albania ended its 47 year Communist Rule and established a multiparty democracy.  There was a mass immigration of Albanians to Italy, Greece, Germany, and North America. Tirana is the capital of Albania, and the flag has a symbol of a double edged eagle which stands for freedom.

Local Community Information: The five states with the largest population of Albanians are New York, Michigan, Massachusetts, New Jersey and Connecticut. Communities in New York and Massachusetts mostly resisted assimilation in their early settlement, but gradually began to accept the American culture as they became educated. They also started to allow their children to go to school to become educated. The Albanian community believes that perseverance is key, and puts a high emphasis on successful education for their children.

Family Structure: Traditionally women were expected to stay at home and obey their husbands, fathers and brothers.  Under the communist government, however, women were emancipated.  Since 1945, girls and women have been encouraged to attend school and establish a career outside the home.  Many of the country's doctors and teachers are women.

Men typically play a main role in management of major decisions pertaining to the family, though this practice has begun to change.  Socializing is very important and visiting is common in the evening.  The family is considered the most stable institution.  Fatherhood is determined by marriage.  The mother's husband is the father of a child born during the marriage, or a child born within 300 days after the dissolution of marriage (even if the biological father may be different).

Domestic violence is seen as a private matter between husband and wife and is not addressed by public policies.  As more laws are enacted in Albania, this practice has begun to change.  Traditionally, several generations lived in the same household due to financial constraints.  Today, if financially stable, young couples may prefer to live alone.

Religious Practice: No official statistics exist because religion was outlawed for so long.  Albanians typically affiliate themselves with Muslim (70%), Orthodox Christian (20%) and Roman Catholic (10%) religions.  Most Muslim Albanians are traditional "Sunnis": 1/4 belongs to Bektashi sect (Unorthodox order).  There is extraordinary religious tolerance in the country now.  The religious divisions are not significant: members of the same family sometimes belong to different religions.

Food in Daily Life: Most traditional Albanian food consists of vegetables, spices, meats and fish.  Olives, grapes, oregano and mullet are some of the ingredients that make up the distinctive taste of Middle-eastern cuisine.  Classic Albanian food is considered by many chefs to be of Turkish, Syrian, Armenian, and Greek origin.  Albanian food also borrows tastes from Italian culture.  Muslim Albanians may not consume pork or drink alcohol due to religious beliefs.

Communication Style: Children are typically taught both Albanian and English.  Albanians use many physical gestures such as hand motions.  Hugs and kisses are given upon greeting.  Actual contact of lips is not as important as the contact of cheek and cheek, and an audible kissing noise is made.  Traditionally head nods are reversed.  Vertical head nod means no and a horizontal head nod means yes.  Head nods have evolved over time.  A left/right tilt can be interpreted as yes, but means no.  It expresses disagreement and confusion.  In contrast, a vertical head nod means no and expresses agreement and understanding.

Concepts of Health and Wellness:  Illness of an individual is a concern for the entire family.  Albanians may believe that illness is caused by unfavorable climate, poor eating, or physical or psychological oppression.  Due to lack of familiarity with mental illness, Albanians may believe that it stems from evil.  Albanians believe that telling the patient directly of the condition may make it worse.  Traditional family organization is strongly patriarchal with men generally making the major decisions.

Due to the displacement of the Albanian population, individuals may not have medical records.  As recent as 1996, anarchists in Albania engaged in burning official documents of government institutions, including hospital records.  Albanians may not want to bathe or wash their hair due to the belief that they may get sick.  Albanians may be reluctant to seek services due to infrequent utilization of healthcare in their native country.  Therefore, Albanians may present with chronic conditions due to poor medical care.  Albanians may not consider preventative care as valuable.  Verbal agreements are taken very seriously and may be considered slights of honor if not adhered to.

When caring for an Albanian patient, be prepared for a large amount of visitors, often bringing food.  Ask the patient who they want included in medical decisions.  When sharing information be very clear and upfront, and say only what is certain.  Be considerate about conveying information and communicate with the patient as to who should receive that information.  Remember difference in communication style such as the reversed head nods and gestural communication.  Explain the purpose of touch before approaching the patient.  Consider dietary concerns of the ethnic population, especially during times of celebration, when fasting is commonly practiced.

Countries and their Cultures: Albanian Americans.  Retrieved 6/29/2011 from http://www.everyculture.com/multi/A-Br/Albanian-Americans.html#ixzz1O8QyVxYs