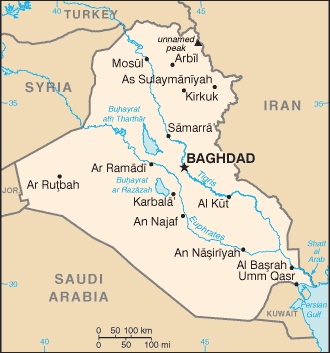 General Cultural Information: Iraq, officially the Republic of Iraq is a country in Western Asia. There are number of languages spoken in Iraq, but Iraqi Arabic is by far the most widely spoken in the country. Arabic is the majority language, Kurdish is spoken by approximately 20%, Assyrian Neo-Aramaic is spoken by 3% - 5% of people, mainly Ethnic Assyrian Christians, South Azeri (called "Turkmen" locally) is spoken by 2% - 3% of people, the Ethnic Turcomans. Mandaic (and other Neo-Aramaic varieties), Shabaki, Armenian, Roma and Persian are spoken by small numbers of between 25,000 and 100,000 each. There may be a few Chechen, Georgian and speakers of other Caucasian languages also.

Iraqi culture revolves around the religion of Islam and family dynamics. Hospitality is very important of Arab and Muslim tradition.

The Islamic Society of Greater Worcester

Family structure: Family and honor is very important to the Iraqi people. Couples can live in either of two ways: with the husband's extended family, or as a nuclear family. At present, with economic hard-ships, families tend to live with extended households. The extended family unit consists of the older couple, sons, their wives and families, and unmarried daughters. Other dependent relatives also may make up part of this group, and the oldest male heads the group. He manages property and makes the final decisions regarding such things as the type of education the children receive, their occupations, and whom they will marry. In this living arrangement household and child-rearing tasks are shared among all female members of the larger families. If the couple can afford to live in a nuclear household, women, even though they work outside the home, retain all domestic and child-care responsibilities. The challenge of the woman's role in this situation is that there is no change in cooking methods or materials, and they are isolated from the help and emotional support of other female family members. Families often grow large, because the Iraqi government has stated that every family should have five children, as four children or fewer is considered a threat to national security. Considering the extreme hardships families now face in light of economic hardship and harsh living conditions, the goal of many is now to simply feed their families and preserve a semblance of some sort of home life.

Religious Practice: Islam is the officially recognized religion of Iraq and is practiced by 95 percent of the population. Islam itself does not distinguish between church and state, so any distinctions between religious and secular law are the result of more recent developments. There are two forms of Muslims in Iraq, the majority Shias (Shiites) and the minority Sunnis. The Shias believe that the original twelve imams (Islamic leaders) were both spiritual and temporal leaders and that the caliph, or successor of Muhammad and leader of Islam, is selected through lineage and descent. The Sunnis believe that the imams were strictly temporal leaders and that the caliph should be elected. The Sunni sect is considered the orthodox branch of Islam. A small percentage of the population is Christian, divided into four churches: Chaldean, Nestorian, Jacobite (Syrian) Orthodox, and Syrian Catholic. The Yazidis, a cultural group living in the northern mountains, believe in a religion that combines paganism, Zoroastrianism, Christianity, and Islam. They are concentrated in the Sinjar Mountains in the north and are herders and cultivators. In the past they have been victims of persecution due to their religious beliefs and practices, of ten being called heretical.

Practice: Muslims pray five times a day from sunrise to sunset. They do not drink alcohol. Also, they practice the holy month of Ramadan, which involves fasting for the whole month, everyday from sunrise to sunset. This requires no intake of food/water/medications. If medications are extremely necessary the individual may skip the fast. However, this may varies for individuals. There are two holidays in the Islamic religion, Eid-ul-Fitr, and Eid-ul-Adha.

Food in Daily Life: The traditional diet included rice with soup or sauce, accompanied by lamb and vegetables. Today, because food is tightly rationed, most people eat rice or another grain sometimes with sauce. Both vegetables and meat are hard to come by. In rural areas it is customary for families to eat together out of a common bowl, while in urban areas individuals eat with plates and utensils.

Communication Style: Arabic is the official language of the Iraqis.  Greetings are very formal with a handshake between the same sex person. Men should wait to see if women extend hand, otherwise greetings between opposite sex can be expressed without touching/shaking of hand. Showing emotion is seen as negatively.

Concepts of Health and Wellness: Illness is accepted as God's will.  Family decision and support is important for a patient.

Individuals might ignore heath concerns that might bring shame to their honor; such as STD’s, drug addiction, contraceptives for unmarried women. Thus, confidentiality is very important.

There is a very big respect for the elderly, they are considered a priority.

There is a preference to be treated by a member of the same sex, especially for woman.

Medical counseling is not well accepted.

Many Muslims pray five times a day, thus it is important to allow families to pray if they are staying at the hospital with the patients.

Illness: “Outbreaks of infectious diseases such as malaria and typhoid are somewhat common in Iraq. In recent years, genetic defects and children born with permanent disabilities have been on the rise in Iraq because of the chemicals used during warfare over the past two decades. These problems translate into poor health statistics among Iraqi immigrants in the United States, since many come here seeking the health care that was unavailable or require an extensive waiting period in their native country.” (Kobel, Paul)

Death and Afterlife: In time of death much of the family and relatives are present.   Traditional Islamic rituals are practiced in time of death. Burial is expected to be as quick as possible. There are few bathing rituals that needs to be practiced. A woman may not be touched by an man, only the father, husband, brother, or son may see her. The body is to be wrapped in a plan white cloth and buried on the ground.

Countries and their Cultures:  Iraqi Americans.  Retrieved from http://www.everyculture.com/multi/Ha-La/Iraqi-Americans.html#ixzz1OnYWUrYz