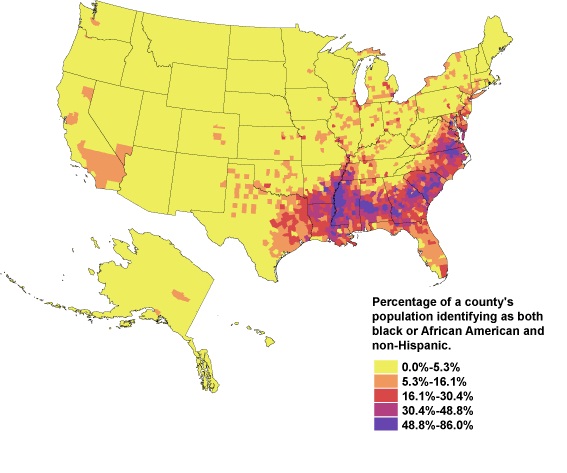 Geography: The second largest on the globe is the continent of Africa, bisected by the equator and bordered to the west by the Atlantic Ocean and to the east by the Indian Ocean. It contains 52 countries and 6 islands that, together, make up about 11.5 million square miles, or 20 percent of the world's land mass. The population is about 600 million.  “Northern Africa is a culturally and historically Mediterranean region, including the Sahara desert, the world's largest expanse of desert, coming close to the size of the United States. Sub-Saharan, or Black Africa, also contains some desert land, but is mainly tropical, with rain forests clustered around the equator; vast savanna grasslands covering more than 30 percent of continent and surrounding the rain forests on the north, east, and south; some mountainous regions; and rivers and lakes that formed from the natural uplifting of the plateau's surface.”(Bigelow, 2011)  There is also southern Africa which has a large ethnic diversity. It contains large communities of Europe, Asia, and racially mixed ancestry, including that of the black ancestry.

General Cultural Information:  African American culture in the United States includes the various cultural traditions of African ethnic groups. According to the 2000 U.S. Census, 12% of the total population is African American whose origins are any of the Black racial groups of Africa. African Americans are a mix of diverse customs, languages and beliefs. The people are united by respect and devotion to their whole community. (Bigelow, 2011)  Four million slaves were brought to the U.S. between the 17th and 19th centuries. The largest number of Africans came from Bantu-speaking regions of west-central Africa. Twenty percent were transported from Senegambia, while the Gold Coast and Sierra Leone each accounted for about 15 percent of the total number.  Others came from the Bight of Biafra and the Windward Coast. “Americans of African descent are regarded as a distinct group and have been subject to discriminatory treatment because of race.” (Painter, 2011)  Much of the African American history shows struggle and will to achieve a respect for the people. “Important historical influences include emancipation, migration from rural areas to cities, and the civil rights movement.” (Lipson, 2005)  African American culture is a synthesis of African culture and American-European culture as they interacted under slavery.  “Most of the flags of African nations contain one or more of three significant colors: red, for the blood of African people; black, for the face of African people; and green, for hope and the history of the fatherland.”(Bigelow, 2011)

Local Community Information: Worcester has one of the highest concentrations of people of Ghanaian descent in the United States. The Worcester community holds a festival every year to celebrate the many different cultures of the African Americans in Worcester, allowing these different cultures to express pride and meaning of what defines them.

Family Structure: African American families are often nuclear, extended, and matriarchal.  Family life is the core of African American culture. Family may sometime include the whole community they associate themselves with.  There is a heavy obligation to those that are referred as family because they feel a very close bond with those individuals. Standing up for one’s self and one’s family is strongly instilled in the African culture and sometimes promoting safety by taking measure at any means necessary. The father or eldest family member may speak for the family.  Often family friends are referred to with familiar pronouns such as uncle or aunt. “As models of community action and responsibility, these African American families have taken stock in an old African proverb: ‘It takes a whole tribe to raise one child.” (Bigelow, 2011)

Religious Practice: African Americans are religious and spiritual and have strong church affiliations.  Baptist, Catholicism, and Islam are the primary affiliations.  The largest denomination in the country is the National Baptist convention of the U.S.A. (Bigelow, 2011) Tribal worship is also largely practiced throughout many African cultures; most of them include rituals for expressing one’s devotion.  Ancestral worship is also practiced to demonstrate appreciation and commitment to the spirits.  Promoting one's health is also considered essential to good spiritual practice.

Communication Style: There are more than 1,000 different African languages. During the slave trade, “Standard English was used as a means of communication, and over the years, this Standard English has been modified by African Americans to encompass their own culture, language, and experience.” (Bigelow, 2011)  When addressing someone, Mr. And Mrs. is commonly used. Women greet with a hug, while men shake hands. A handshake is acceptable when greeting strangers. Conversations tend to be loud and engaging with body movements. There shows affection. Communication style is direct. A family- centered approach should be used to address serious or terminal illness.  Youth don't look elders directly in the eye. Appropriate eye contact between adults shows respect and establishment of trust. Silence may indicate lack of trust, and unacceptance. African Americans openly express emotions as trust is established. Privacy should be respected until trust is achieved especially for men because they do not easily express private issues. Clinicians should also always get verbal permission before touching. (Lipson & Dibble, 2005)

Concepts of Health and Wellness: Health is viewed as harmony with nature. Illness is believed to be caused by natural causes, improper diet, and exposure to cold/wind. They may also view illness as a punishment from God or from witchcraft. The sick individual expects attention from family and friends, but maintains independence. Teas, herbs and warm medication for chest colds are some of the practiced home remedies. There is an acceptance of biomedical and other pharmacological methods, and adherence as prescribed. Medication sharing is uncommon. To convey a serious or terminal illness, a family-centered approach is ideal. Will accept surgery, transfusions, organ transplants (of immediate family), and other necessary procedures. Participation in seeking and routine exam is regular, practices vary by gender and by socioeconomic and education levels. Men participate less in screening. (Lipson & Dibble, 2005)

Death and afterlife: Belief that one dies when God is ready for him/her. Grief is strong and expressive. Impending deaths should be reported immediately as family members may need to travel. Dying elders are preferred to be cared for at home, although some may believe that death at home brings bad luck. Professional cleansing is preferred unless there is a religious ritual involved. They avoid cremation. Discussions of advance directives and organ donation are suspect. Usually one person in the family is aware of the person's health care wishes.