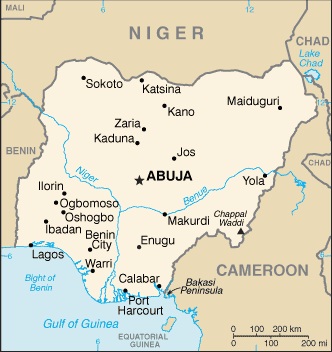 General Cultural Information: The country is located in West Africa. The three largest and most influential ethnic groups in Nigeria are Hausa, Igbo, Yourba. In terms of religion Nigeria is roughly split half and half between Muslims and Christians with very small minority who practice traditional religions. There are nearly 521 languages catalogued in Nigeria.The major native languages spoken in Nigeria represent three major families of African languages, such as Yourba, Ibo, the Hausa language is Afro-Asiatic and kanuri, spoken in the northeast. English, being the official language, is widely used for education, business transactions and for official purposes. English as a first language, however, remains exclusive preserve of small miniority of the country's urban elite, and is not spoken at all in some rural areas.

Family Structure: Extended families are still the norm and are the backbone of the social system. Grandparents, aunts, uncles, sisters, brothers and in-laws all work as a unit through life. Family relationships are guided by hierarchy and seniority. Social standing and recognition achieved through extended families. Similarly a family's honour is influenced by the actions of its members. Individuals turn to members of the extended family for financial aid and guidance, and family is expected to provide for the welfare of every member. Although the role of extended family is diminishing somewhat in urban areas, there remains a strong tradition of mutual caring and responsibility among the members.

Religious Practice: About 50% of Nigerians are Muslim, 40% are Christians, and the other 10% practice indigenous religions.  The Muslim Nigerians practice the teachings of prophet Muhammad, and the holy book Qur'an. The most popular forms of Christianity in Nigeria include Anglican, Presbyterian, American Southern Baptist, and Methodist. The Muslim and the Christian Nigerians incorporate the indigenous religions into their religious culture and rituals (like ancestral worship).

Food in Daily Life: In the south, crops such as corn, yams, and sweet potatoes form the base diet. These vegetables are often pounded into a thick, sticky dough or paste. This is often served with palm oil based stew made with chicken, beef, goat, tomatoes, okra, onions, bitter leaves, or whatever meats and vegetables might be on hand. Fruits such as papaya, pineapples, coconuts, oranges, mangoes, and bananas also are very common in the tropical south.

In the north, grains such as millet, sorghum, and corn are boiled into a porridge-like dish that forms the basis of the diet. This is served with an oil based soup usually flavored with onions, okra, and tomatoes. Sometimes meat is included, though among Hausa it is often reserved for special occasions. Alcohol is very famous in the south but less is so in north. The most popular form of alcohol is palm wine.

Communication Style: Greetings include handshakes, and sometimes bowing in presence of elders. Nigerian Americans are incorporating hugs into their greetings. Direct eye contact, especially to adults, is considered disrespectful. Younger individuals are expected to initiate communication with an elder. The tone is polite, soft spoken, cheerful, and non-confrontational. Silence may be used to avoid conflict, or express disagreement. Nigerians are reserved and stoic for the most part.

Concepts of Health and Wellness: Health is viewed as a state of harmony with one's environment, including the supernatural world. Illness is a result of disharmony and conflict. To attain good health, one must have a proper diet (eating and drinking in moderation), be active, rest, and avoid emotional distress and conflict. Indigenous health systems include massages, dietary restrictions, offering to the gods, amulets, and prayers. Home and folk remedies for used some illnesses, while some diseases are treated by western medicine. Patients almost always accept procedures suggested by physicians. Invasive surgeries are feared, but accepted through educating and reassurance.

Death and Afterlife: Southern Nigerians believe in reincarnation, while Muslims around Nigeria believe death as a God's will. Muslims (mostly in Northern Nigeria) follow religious rituals of burial, while the southern Nigerians have different rituals with elaborate walks, dancing, feasting, and crying until the burial is complete. Cremation is unacceptable, and bodies are prepared by mortuaries. Most Nigerians prefer to be buried in their homeland.

Countries and their Cultures:  Nigeria.  Retrieved from http://www.everyculture.com/Ma-Ni/Nigeria.html#ixzz1Q7Ch4KCi