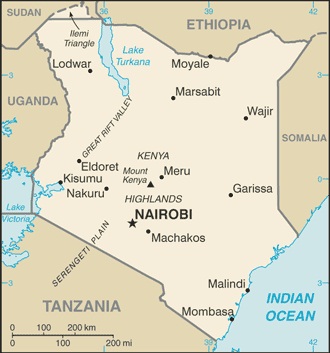 Kenya is located in East Africa. It borders Sudan, Somalia, Tanzania, Ethiopia and the Indian Ocean. The population is 39,802,015 with 42 indigenous ethnic groups. Kenyans identify with their tribe or ethnic group, secondarily with the nation. They are generally friendly and hospitable people. English and Swahili are the official languages of Kenya. English is used in government, business and schools.

Polygamy is traditional but now this practice is becoming less typical.  Men with more than one wife build different huts for their wives where his wife lives with their children. In a family with one wife, the parents often live together with girls and younger boys, while the older boys have smaller houses close by. According to tradition, it is the responsibility of the youngest son to take care for his aging parents. Inheritance passes from father to son. Extended families are considered a single unit. Children are often equally close to cousins and siblings, and aunts and uncles are thought of as mothers and fathers. Father is the head of the family.

The population is 38 percent Protestant and 28 percent Roman Catholic, 24 percent Animist, and 10 percent Muslim. Many people incorporate traditional beliefs into their practice of Christianity, causing some tension between Kenyan and Christian churches, particularly on the issue of polygamy. Religious practices of different ethnic groups vary, but one common element is the belief in a spirit world inhabited by the souls of ancestors. The Kikuyu and several other groups worship the god, ngai, who is said to live on top of Mt. Kenya. The official languages are English and Kiswahili (or Swahili).

Corn (or maize) is the staple food of Kenyans. it is ground into flour and prepared as a porridge called posho, which is sometimes mixed with mashed beans, potatoes, and vegetables, to make a dish called irio. another popular meal is a beef stew called ugali.this is eaten from a big pot, and each diner takes a piece of ugali, which he or she uses as a spoon to pick up beans and other vegetables. boiled greens, called mboga, are a common side dish. Banana porridge, called matoke, is another common dish. Meat is expensive, and is rarely eaten. Herders depend on milk as their primary food, and fish is popular on the coast and around Lake Victoria. Mombasa is known for its Indian foods brought by the numerous immigrants from the subcontinent, including curries, samosas, and chapatti, a fried bread. Snacks include corn on the cob, mandazi (fried dough), potato chips, and peanuts.

Tea mixed with milk and sugar is a common drink. Palm wine is another popular libation, especially in Mombasa. Beer is ubiquitous, most of it produced locally by the Kenyan breweries. One special type of brew, made with honey, is called uki.

Common form of greeting is a handshake, followed by questions about health (like asking, how are you?), family, and work. People are usually addressed by their professional titles followed by their surnames. Men should wait for women to extend their hand first. Women that are older than 21 are commonly addressed as “mama” and men over age 35 are addressed “mzee”. Children address adults as aunts or uncles even if they are not related. It is important to have a direct and frank style of communication. Metaphors and analogies may be used to avoid problems, generally uncomfortable with blunt statements. There is also a lot of pride in controlling emotions. It is also seen impolite to decline.

Concepts of Health and Wellness:

“Despite recent efforts to address health issues, Kenyans have a fairly low life expectancy (47 years for males and 48 years for females) and a high percentage of infant deaths (59.38 per 1,000 births). Poor living conditions increase the risk of disease and several diseases are particularly troublesome to Kenyans: poliomyelitis, schistosomiasis, intestinal parasites, malaria, respiratory ailments, and, increasingly, HIV infection. Most Kenyan Americans conform to the rules established for immigrants and are in good health when they enter the United States. Like most Americans, Kenyan Americans are able to take advantage of the medical insurance offered as a benefit of employment.” (Rudolph, L). The health care system in Kenya is understaffed and poorly supplied. Access to modern health care is rare, particularly in rural areas, and many people depends on herbal medicines and healing rituals as alternative medicine.

Death and Afterlife: Death in African religions is one of the last transitional stages of life requiring passage rites, and this too takes a long time to complete. The deceased must be "detached" from the living and make as smooth a transition to the next life as possible. Different cultures have different death ritual practice. Please refer to the below link for detailed information.