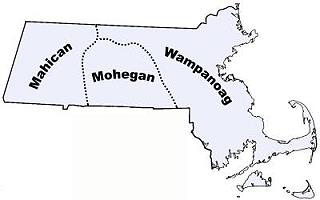 "Massachusetts" is an Algonquin Indian word. It comes from the Wampanoag word Massachuset, which means "by the range of hills."

Mohegan includes the Nipmuc tribe and Pequot tribe. The Mohegan tribe is an Algonquian-speaking tribe that lives in the eastern upper Thames River valley of Connecticut.

The Nipmuc belonged to the Algonquian linguistic family. Their nearest relatives were the other tribes of Massachusetts and the tribes of Rhode island, Connecticut, and the Hudson river valley.

Nipmuc  (from nipamaug, 'fresh-water fishing place'). The inland tribes of central Massachusetts lived chiefly in the south part of worcester county, extending into Connecticut and Rhode island. Their chief seats were on the headwaters of Blackstone and Quinebaug rivers, and about the ponds of Brookfield.  Hassanamesit seems to have been their principal village in 1674, but their villages had no apparent political connection, and the different parts of their territory were subject to their more powerful neighbors, the Massachuset, Wampanoag, Narraganset, and Mohegan, and even tributary to the Mohawk. The Nashua, dwelling farther north, are sometimes classed with the Nipmuc, but were rather a distinct body. The New England missionaries had 7 villages of Christian Indians among them in 1674; but on the outbreak of King Philip's war in the next year almost all of them joined the hostile tribes, and at its close fled to Canada or westward to the Mahican and other tribes on the Hudson.

Cultural Information: The Native American population is very diverse.  There are over 550 recognized tribes in the U.S.  Clinicians and health care providers should ask each individual what their tribal affiliation is (but inappropriate to ask, do you have an Indian name?).

Family Structure: Kinship roles are extensive.  Autonomy is highly valued.  Family is broadly defined to include the immediate family as well as extended family members and fictive kin. "Family" is a matter of blood and spirit.  Other members of the family's tribe may also be included as part of the family.  Extended family relationships are important, especially during illness and death.  Any illness concerns the entire family.  Decision-making varies with kinship structure.  Generally, individuals speak for themselves, but family members may speak on behalf of the person who is ill.  Family spokesperson varies with kinship structure and culture. Spokesperson may not be decision maker.

Religious Practice: Through past colonization and Christian conversion, many American Indians have some Christian ties.  They may also practice traditional beliefs.  Clinicians should ask about their beliefs and how they relate to their health care. Traditional religious beliefs may not be openly discussed.  Spiritual healing may be combined with Western medicine.  Staff should not be present at spiritual healing rituals or interrupt.  Do not casually admire or move sacred items.

Food Practices: The most important Native American food crop was Indian corn (also known as maize, which comes from the Taino Indian name for the plant.) The majority of American Indian tribes grew at least some corn, and even tribes that did not grow corn themselves often traded with neighbors for it.  Other important American Indian crops included beans, squash, pumpkins, sunflowers, wild rice, potatoes, sweet potatoes, tomatoes, peppers, peanuts, avocados, papayas, and chocolate.  Whether they were farming tribes or not, most Native American tribes had very meat-heavy diets.

Communication style: The Nipmuc belonged to the Algonquian linguistic family.  Over all there are more than 100 indigenous languages, but today English is usually spoken.   Speaker should not be interrupted.  There may be long pauses in the conversation.  Tone expresses urgency.  Be direct, emphatic, clear, and calm.  Loudness is associated with aggression.   When making a request, explain why it is needed.  Respect is communicated by avoiding eye contact.

Concepts of Health and Wellness: Many Native American healing practices come from the belief that mind, body, spirit, and emotions must be balanced to be fully healthy.  Some Native Americans believe that spirits of plants and animals sent by the Creator are sources for healing.  Some cultures prefer not to openly discuss terminal status and DNR orders due to belief that negative thoughts may hasten loss.

Other tribes, bands and communities remaining in Massachusetts today include: