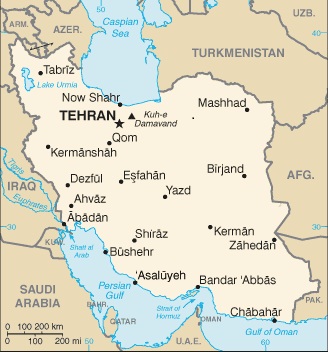 General Cultural Information: Iran, officially the Islamic Republic of Iran, is a country in Central Eurasia and Western Asia.  Iranian culture has long been a predominant culture of the Middle East and Central Asia, with Persian considered the language of intellectuals during much of the 2nd millennium, and the language of religion and the populace before that. Iran is a diverse country consisting of people of many religions and ethnic backgrounds cemented by the Persian culture.

Family structure: Iranians regard the unity and honor of the family as more important than individual wishes. Many people prefer to live near their relatives. Most families are headed by the oldest male, with formal authority descending through other males by age. The father is head of the family and is expected to protect and provide for the family. Mothers are expected to care for children and the household. Gender roles have evolved with the influence of education. Children are raised to be disciplined and to respect their elders. They are expected to be clean, well-behaved, and good students. Parents make sacrifices for children, especially for their education.  Unmarried adult children are expected to live at home until they are married. Elderly parents are dependent on adult children/ grandchildren. Family members may visit patients at the hospital for extended periods, as they help and care for the patient.

Religious Practice: The overwhelming majority of Iranians (about 98 percent) are Shi'ah Muslim. Shi'ah, one of the two schools of Islam, is the state religion. The Islamic religion has five "pillars," or practices, that must be observed by all Muslims: (1) praying five times a day; (2) giving alms, or zakat, to the poor; (3) fasting during the month of Ramadan; (4) making the pilgrimage, or hajj, to Mecca; and (5) reciting the shahada (ashhadu an la illah ila Allah wa ashhadu in Muhammadu rasul Allah ), which means "I witness that there is no god but Allah and that Muhammad is the prophet of Allah." The Shi'a Muslims believe Hussain to be the central figure rather than Mohammad (who is accepted by the Sunnis to be the central figure). A strong belief in the Imam as the leader exists for Shi'a Muslims. There are 30 days in the lunar calendar consisting of religious holidays for the Shi'a Muslims revolving around the birth of death of various Imams.

Food in daily Life: Iranians have a healthy diet centered on fresh fruits, greens and vegetables. Meat (usually lamb, goat, or chicken) is used as a condiment rather than as the centerpiece of a meal. Rice and fresh unleavened or semi leavened whole-grain bread are staple starches. The primary beverage is black tea. The principal dietary taboo is the Islamic prohibition against pork. Breakfast is a light meal consisting of fresh unleavened bread, tea, and perhaps butter, white (feta-style) cheese, and jam. Eggs may also be eaten fried or boiled.

The main meal of the day is eaten at around one o'clock in the afternoon. In a middle-class household it usually starts with a plate of fresh greens— scallions, radishes, fresh basil, mint, coriander, and others in season. This is served with unleavened bread and white cheese. The main dish is steamed aromatic rice (chelow) served with one or more stews made of meat and a fresh vegetable or fruit. This stew, called khoresht resembles a mild curry. It centers on a central ingredient such as eggplant, okra, spinach, quince, celery, or a myriad of other possibilities. One particularly renowned khoresht, fesenjun, consists of lamb, chicken, duck, or pheasant cooked in a sauce of onions, ground walnuts, and pomegranate molasses. In addition to its preparation as chelow, rice may also be prepared as a pilaf (polow) by mixing in fresh herbs, vegetables, fruit, or meat after it is boiled, but before it is steamed.

Communication Style: The main language spoken is Farsi or Persian. Turkish languages and dialects (most importantly Azeri) are spoken in different areas in Iran. Additionally, Arabic is spoken in the southwestern parts of the country. Most US born Iranians speak English. It is proper to greet with the last name with a handshake, slight bow. Physical contact between members of the opposite sex is avoided. Men tend to shake hands, while women usually say hello. Standing up when someone enters the room is considered polite. Elders are preferred to be greeted first as a display of respect. Communication in healthcare is careful rather than open. A relative or friend of similar age or gender may be used as interpret to easily express sensitive issues.  Family members tend to keep bad news hidden from the patient. Direct eye contact is acceptable. Silence is a sign of respect. A thumbs up is considered vulgar. Clinicians should explain the procedure and treatment and ask permission to touch to achieve cooperation.

Concepts of Health and Wellness: The body is viewed in terms of its relationship with God, nutrition, family, and society. Maintenance of health is a continuous daily concern for Iranians. Common health problems include cardiovascular disease, hypertension, arthritis, gastrointestinal disorders, and cancer. Disabilities are seen as God's will and an act of nature, a disabled person is well accepted and cared for. Iranians accept Western biomedical diagnoses and their own cultural illness categories. They respect educated figures and cooperate with healthcare professionals for procedures including surgery, bood transfusions, and organ transplants.

Death and Afterlife: Death is viewed as a beginning of spiritual existence, strengthening the relationship with God. All family and friends provide support and assistance.  Praying or crying softly at bedside is common. Families should be allowed to visit the body. There are rituals of cleansing important for families to perform before burial. Body is not to be viewed after it is washed. Cremation or Embalming is not practiced. Organ donation is accepted and practiced. Body must be respected if undergoing autopsy.

Countries and their cultures: Culture of Iran. Retrieved from:  http://www.everyculture.com/ge-it/iran.html#ixzz1onkk0mgd