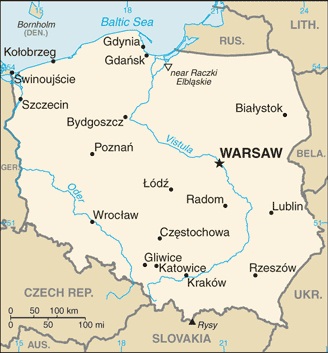 General Cultural Information: Poland is located in Central Europe, covering 120,700 square miles. Its bordered by the Baltic Sea, Russia, Slovakia, Czech Republic; and Germany. The culture is composed of Latin and Byzantine influences. It is a homogenized culture of the eastern and western world. There is a great appreciation of art and culture. The Polish are generous and hospitable people.

Poles numbered among the earliest colonists in the New World and today, as their numbers exceed ten million, they represent the largest of the Slavic groups in America.

Family Structure: Typically, the Polish family structure is strongly nuclear and patriarchal. However, as with other ethnic groups coming to America, Poles too have adapted to the American way of life, which means a stronger role for the woman in the family and in the working world, with a subsequent loosening of the strong family tie. Initially, single or married men were likely to immigrate alone, living in crowded quarters or rooming houses, saving their money and sending large amounts back to Poland. That immigration trend changed over the years, to be replaced by family units immigrating together. In the 1990s, however, the immigration pattern has come full circle, with many single men and women coming to the United States in search of work.

Until recently, Polish Americans have tended to marry within the community of Poles, but this too has changed over the years. A strong ethnic identity is maintained now not so much through shared traditions or folk culture, but through national pride. As with many European immigrant groups, male children were looked upon as the breadwinners and females as future wives and mothers. This held true through the second wave of immigrants, but with the third wave and with second and third generation families, women in general took a more important role in extra-familial life.

As with many other immigrant groups, the Poles maintain traditions most closely in those ceremonies for which the community holds great value: weddings, christenings and funerals. Weddings are no longer the hugely staged events of Polish heritage, but they are often long and heavy-drinking affairs, involving several of the customary seven steps: inquiry and proposal; betrothal; maiden evening and the symbolic unbraiding of the virgin's hair; baking the wedding cake; marriage ceremony; putting to bed; and removal to the groom's house. Traditional dances such as the krakowiak, oberek, mazur, and the zbo'jnicki will be enjoyed at such occasions, as well as the polka, a popular dance.

Religious Practice: Poland is a largely Catholic nation, a religion that survived even under the anti-clerical reign of the communists. It is a deeply ingrained part of the Polish life, and thus immigrants to the United States brought the religion with them, Initially, Polish American parishes were established from simple meetings of the local religious in stores or hotels. These meetings soon became societies, taking on the name of a saint, and later developed into the parish itself, with priests arriving from various areas of Poland. The members of the parish were responsible for everything: financial support of their clergy as well as construction of a church and any other buildings needed by the priest. Polish American Catholics were responsible for the creation of seven religious orders, including the Resurrectionists and the Felicians who in turn created schools and seminaries and brought nuns from Poland to help with orphanages and other social services.

Food in Daily Life: The diet of Polish Americans has also changed over the years. One marked change from Poland is the increased consumption of meat. Polish sausages, especially the kielbasa ―garlic-flavored pork sausage―have become all but synonymous with Polish cuisine. Other staples include cabbage in the form of sauerkraut or cabbage rolls, dark bread, potatoes, beets, barley, and oatmeal. Of course this traditional diet has been added to by usual American fare, but especially at festivities and celebrations such as Christmas and Easter, Polish Americans still serve their traditional food. Polish Americans have, in addition to the sausage, also contributed staples to American cuisine, including the breakfast roll, bialys, the babka coffeecake, and potato pancakes.

Communication Style: Greetings are very formal and polite. When greeting a family or friend, greetings may include kissing on the cheek. However, when greeting strangers, a handshake is appropriate. People are to be addressed as Mr. or Mrs. Eye contact is very important. Polish are direct and have strong opinions, sometimes expressed through tone of voice. When one shares their thoughts and feelings with someone, it’s a sign of hospitality and may not disagree to be polite.

Concepts of Health and Wellness: Pain may be seen as a punishment from God. There is a belief in both biomedical and natural causes.  Herbal remedies and folk treatments are used; however they have trust in physicians, and take medications when needed. Poles have a strong work ethic; therefore, they may work through fatigue. Self-care treatments are applied before seeking medical help.

Death is accepted as a normal part of life, souls are believed to exist eternally after leaving the body. Special needs include rosary, statues, candles, and sometimes a priest for prayer. They prayers are to protect the souls from harm. Most funeral practices are of traditional Catholic rituals.

Countries and their Cultures:  Poland.  Retrieved from  http://www.everyculture.com/No-Sa/Poland.html#ixzz1Q6xfhdbW