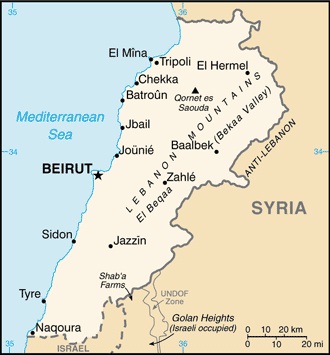 General Cultural Information: Lebanon is a country on the eastern shore of the Mediterranean Sea. Languages spoken include Arabic, French, English, and Armenian. There are many accents in Lebanon. The Beirut accent is the mellowest and most highly regarded, while country accents are harsher. Accents are a much higher indicator of social status than they are in the United States. The people of Lebanon are proud of their tradition and hospitality.

The Lebanese people are very religious, and respect is very important. There are also specific gender roles in play. Women have rights such as having to be protected by everyone in the family. They are considered the heart of the family. Men do take the final say in decision making, however   a woman’s opinion is valued. Westernization, education and independence is decreasing the Lebanese culture and customs.

Family Structure: Most household units are made up of a nuclear family. However, the extended family is also very important and often functions as a social security system. In the household, the husband and wife share authority, although wives usually wield more influence over children and in various household matters. Grandparents or members of the extended family will help care for a baby. After the family, a person's loyalty is usually with members of his/her own religion who inhabit the same town.

Religious Practice:  Most people in Lebanon are religious and monotheistic. No one religion is dominant. The country has Muslim Shiites, Sunnis, Druzes and Christian Maronites, and Greek Orthodox and Armenian Orthodox.

Food in daily Life:  Lebanese cuisine is Mediterranean. Pita bread is a staple. The Lebanese enjoy hummus (a chick pea dip), fool (a fava bean dip), and other bean dishes. Rice is nearly a staple, and pasta is very popular. Salted yogurt is common in many dishes. Red meat and chicken are common but are usually eaten as part of a dish. Pork is less popular, since it is forbidden under Islamic law.

Communication Style: A smile and a handshake is the general form of greeting. Close friends greet with a three kisses on the cheeks (alternating cheeks after each kiss). However greetings with stranger include just a handshake. It is also appropriate to ask of family, health, and work with the greeting. It is also best if the woman raises hand to shake with the man first. Direct eye contact is important, and physical contact is in the norm. Maintaining personal honor is important, therefore communication is indirect. Body language is also another important communication style. Age is greatly respected, and respect for parents is very important to display family honor.

Concepts of health and Wellness: Anemia and lactose intolerance are common health issues. They support the conventional medical establishment. Individuals usually prefer to be treated by the same sex medical provider, especially women. Patients prefer family for care and support. The right hand is considered the clean hand. Maintaining good hygiene, and proper diet are essential to good health.

Death is considered destiny, when you die and how you die is the destined since birth. People are allowed to openly express their remorse. Funerals tend to be elaborate. The rituals that are practiced are specific to the religion to which they belong. There is a strong belief in paradise.

Countries and their Cultures:  Lebanon.  Retrieved from  http://www.everyculture.com/Ja-Ma/Lebanon.html#ixzz1Pv80f82D